Having spent Sunday morning foraging for lava tubes on exposed basalt sea cliffs of western Kalapana, I decided to head north to spend the afternoon and evening exploring Kilauea itself. The drive up the volcano flank was, I must say, rather unglamorous, with the steady gradient (related to the low viscosity nature of the flows constructing the Kilauea) and the heavy, rain forest vegetation hiding the fact you are on a living, (fire) breathing volcano, perched above a hot spot. Upon arrival at the Hawai’i Volcanoes National Park and thinking largely of @andydoggerbank and @r_siddall, I headed straight to the restaurant for a late lunch. Finally, I could try one of the local specialities, ‘poke’, which here was made with ‘ahi’ (tuna). It was extremely nice; I can only really liken it to sushi, which might be doing it a disservice. Food aside, it was rather strange experience, with the Superbowl being played on every TV in the packed restaurant bar. Lady Gaga in front of me, and Kilauea behind me; it was truly something that should be on everyone’s snuff list. Well, I say Kilauea was behind me, but to be honest I wasn’t sure. Dense clouds had descended and the rain had gotten into full swing, so there was little to see out of the restaurant window, despite us sitting on the very edge of the main crater.

After lunch I did a quick circuit of the crater rim road, taking in the Thurston lava tube, deposits of the at least partly fissure-fed 1969-1974 eruption sequence, and a rather spectacular crater of Pu’u Huluhulu, perched between the main, active Kilauea crater and the rather more subdued, but still grumpy, Puʻu ʻŌʻō. The walk up to Pu’u Huluhulu was  desolate and eerie, heading out across barren lava fields, before twisting steeply up through the rainforest. On the 1.5 hour walk I was alone; I guess the main tourist pack don’t like to stray to far from the road.

As sun fell and the clouds and rain closed in, I headed to the Jagger Museum; this rather dated but still charming museum, which documents the mythical, historical and geological history of Kilauea, provides one of the main vantage points into the active part of the Kilauea crater. To cut a long story short, the weather wasn’t playing ball. Dense fog and driving rain contrived to piss-off the masses of tourists who had made the their way to the crater rim. Occasionally, the fog cleared enough to allow a tantalising glimpse of the bubble lava lake; for the rest of the time is was pitch black and very wet. Despite the lack of sustained lava action, I thought it was stunning, with the lava lake looking spectacular when it deigned to show itself, and the sky glowing an eerie red. Soaking wet, I headed down to ‘Volcano’ (seriously, that’s it’s name…) for some food and to find my accommodation. Some email checking, and it was time for bed. 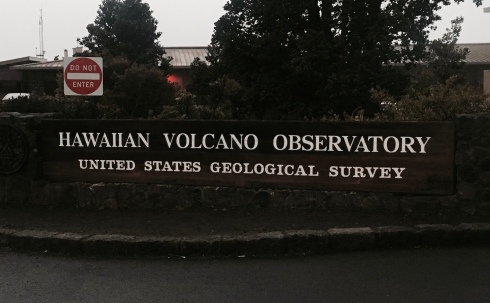 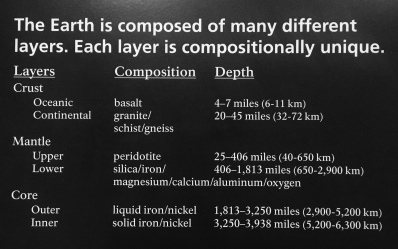 Pele, goddess of fire, lightning, wind and volcanoes and the creator of the Hawaiian Islands.

My flight back to O’ahu was at 0900; not so early, but I wanted to go for a run on a volcano. Who wouldn’t? I managed a quick 2.5 miles before packing and racing back to the airport in Hilo. The flight was awesome, affording great views of Kilauea, Mauna Loa and Mauna Kea. What was particularly striking were the relatively young, fresh, largely unvegetated lava flows mantling Mauna Loa’s eastern flank, and the deep gorges carved into the older flows. 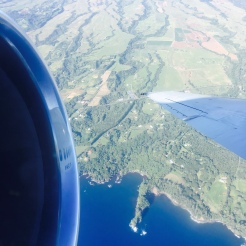 Landing back in a rain-lashed Honolulu, it was time to prepare for my talk at the University of Hawai’i at Manoa. It’s amazing how, given some time, I can fiddle with a talk; swapping slides to make the order more logical, increasing font sizes to make diagram labelling a little clearer, and tweaking animations to make the talk more ‘lively’. Satisfied if not pleased, I headed up to the university to meet my host Steve Martel. Steve is a structural geologist/rock mechanisist. He knows equations and coding, and is terrifyingly smart. I am most familiar with his research on normal fault growth and forced folding, with the field components of his work being conducted on the Kilauea, where collapse of its southern flank has led to the development of a quite spectacular array of normal fault, forced folds and relay ramps. Steve was great fun, and we shared an excitable couple of hours talking about faulting, landslide triggering, and the geological setting of Hawaii. Rather appropriately, my talk, which can be downloaded here and which I discussed here, was on normal fault growth. Steve provided a rather lengthy introduction; I personally couldn’t wait for the person he described to turn up to give the talk…Seriously, the problem with an upbeat, positive, almost glowing introduction is that you then can only let everyone down by giving a shitty talk. In any case, a very small but keen audience were extremely patient with me whilst I got increasingly excited about the way in which normal faults grow and why it matters. The talk went well, of at least well enough that I was presented with some local basalt as a gift!

With the weather clearing, I decided to walk the three miles back from the campus to Waikiki. After some email checking, blog prepping and Japanese food(ing), followed by sampling of several local beers by the absolutely awesome Maui Brewing Company, it was time for bed.

N.B. the featured imaged at the top of this post was a sticker I saw whilst out running. It somehow captures geological and personal feelings, don’t ya think?

I am Professor of Basin Analysis @imperialcollege. I ❤️ 🏃🏿, 🚴🏿 and @basinsIC (⛏). I obsess about the tectono-stratigraphic development of sedimentary basins. Why? Because I'm hopeless at everything else. View more posts

One thought on “Kīlauea, Hawai’i”