So…having been trapped in Arkansas for a little longer than planned, I decided to write a close-out blogpost for my GSA James B. Thompson Distinguished Lecturer Tour. As documented here and on Twitter, and as you will read below, I’ve had an amazing time. It is hard and perhaps unfair (unwise, even) to pick-out and list all the cool stuff I’ve done or awesome people I’ve met; all that is documented in the blow-by-blow posts. However, having scrolled back through my old posts, it is these five days/experiences/’things’ that will probably stick in my mind for the next few weeks, months and years…enjoy.

1. My day at the University of Connecticut – feeling refreshed having spent the weekend recuperating in Blacksburg, VA with Brian Romans and friends, I was full of beans as I landed in New England and walked around the beautiful, leafy campus of UConn with my host Julie Fosdick. However, it was the unbelievably friendly, open, chatty faculty who made this one of the most memorable days of the tour; they wanted to talk as much about life as they did about research. I laughed more on this day than on any other day of the tour; this was perfect, setting me up nicely for the final, gruelling week. In fact, it was really the people, including my awesome hosts, who made the whole tour. Without them, the tour would have simply been a bunch of PowerPoint slides, long waits in vomit-beige, provincial US airports, and sole-dining on, in some cases, poor-quality calories.

2. ‘Moped day’ on Honolulu – Sometimes spontaneity, and to be honest downright recklessness, can lead to great things. Being low on underpants and spending time doing laundry in Waikiki, I realised I didn’t want to spend time doing laundry in Waikiki. I was in the middle of the Pacific Ocean on a tropical island; surely there must be something else to do? Remembering I use to ride a motorbike, and that a motorbike is essentially a regular bike with a motor, I walked to a random garage at the end of the strip and hired a moped. My day became infinitely better, as I rode around a giant monogentic crater, saw a.maze.ing pyroclastic deposits, and ate tacos on the beach before, you know, watching humpback whales from Makapu’u Point. Don’t think. Simply do. 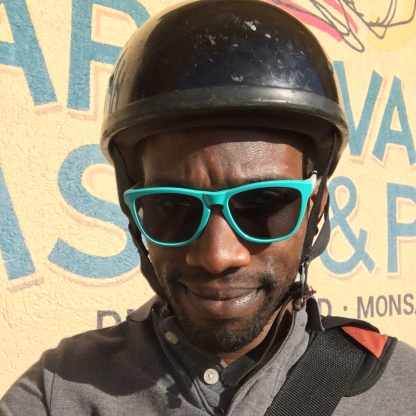 Mopeds are so much fun. I highly recommend them. 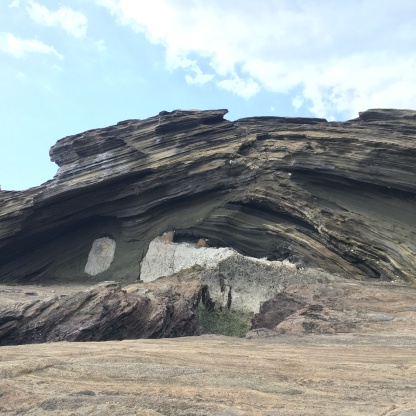 The volcaniclastics exposed at Lanai Lookout, east of Honolulu, HI, were, quite frankly, some of the best rocks I have ever seen.

Diamond Head at sunrise, Honolulu, HI. The run that followed was hard. Real hard.
3. Kilauea – Panicking about the right flights to take; being short on time; worrying about car hire and accommodation; pondering the wisdom of vlogging. All of these things almost conspired to make me not go to Big Island and the volcano of Kilauea. However, the lure of lava was too great, and I was rewarded with a fun-filled, action-packed 24 hours. So followed a chance encounter with my friend Gulce, a cycle ride across ancient lava fields to a lava tube sea entry, Lady Gaga at the Super Bowl half-time show whilst eating poke and staring out at the lava-filled summit crater, and a stay at a kooky B&B in the aptly named village of ‘Volcano’. Again, don’t think. Simply do.

Even though I didn’ directly see the lava pipe on Big Island, how can I complain when the overall view was like this.

4. Science (defined by the Gods of Wikipedia as a systematic enterprise that builds and organizes knowledge in the form of testable explanations and predictions about the universe) – Scientific discoveries. People attacking science. People marching for science. Science has been in the news a lot lately. In fact, my tour was ostensibly about science. Growing up, science seemed such a serious, grown-up word, conjuring-up images of lab coats, simmering, smoking vials, and crazy-haired, white, male scientists. Science is and will remain some of those things, although this tour has taught me or at least reinforced for me that science is a rather weird thing. It can still cause me to scratch my head and weep into my pillow, but it can and actually normally is, full of fun and downright silliness. We can be so serious when reviewing papers for journals or asking questions at conferences; however, the same scientific discourse, for that’s what it is, can occur in far less formal settings, such as in dive bars in New York City, at the top of mountains overlooking the foothills of the Rockies, or when trail running and dodging tortoises in the Ozark mountains. I think we should take science into these places too.

Science? Nah. The tour is about people. Here with Matt Hall and Graham Ganssle in Battery Park, NYC

Like I said. I run. Here with John and Matt, trail running in the Ozarks, Arkansas

All the things I like; friend, running, Boulder and awesome geology.

The tour was as much about the people as the science. Derek Sawyer at Ohio State was one of the best.
5. Day 2 in Golden – Yes, I not long got back from Hawaii and yes, the talk at Colorado School of Mines has gone well the day before, and yes the weather was unseasonably gorgeous. So on reflection, maybe it was these things that contributed to making Day 2 in Golden, CO so awesome. However, Day 2 certainly did it own thang by including: (i) a pre-breakfast run up the gorgeous South Table Mountain with Jesse, Rich and Zane, crossing the K-T boundary and getting spectacular views westwards across the blue sky-mantled Rocky Mountains; (ii) a visit to the USGS for a meeting with Rich, Chris and Ryan; we discussed normal faults straight for around two hours. I was in heaven and my brain was fizzing; (ii) a walk in the sunshine to look at Late Cretaceous dinosaur trackways (my obsession with dinosaur trackways is now well-documented); (iv) an afternoon looking at awesome seismic data with bright, mustard-keen CSM students; and (v) a drive into the Rocky Mountains with Bruce, Jesse and Zan to the town of Nederland to eat hipster, sourdough-based pizza, and to watch live bluegrass(-inspired) music at the famous Caribou Lounge. Just to top things off, I caught a glimpse of the continental divide. I don’t think my heart could take everyday being like Day 2 in Golden, although I would dearly love it to be the case.

In the context of equality and diversity, someone recently mentioned on Twitter that we should think really, really hard about selecting nominees and winners of professional society and institutional awards. They remarked these awards can be life-changing, and should be thus taken seriously. I strongly concur and would argue that they should be life-changing; what value really is another award to simply throw onto the shelf alongside millions of other awards? Recognition should be cherished. I can safely say that for some of the reasons listed above and documented elsewhere in my blog, this has been a life-changing experience for me. I am happy and proud to have represented GSA, and thank them for allowing me to have this experience. I’d also like to say thanks to Vicki, Olive, Hazel and Norah, who have put up with me being a long, long way away, for a long, long time…xxx. Seis_matters, signing-off.

I am Professor of Basin Analysis @imperialcollege. I ❤️ 🏃🏿, 🚴🏿 and @basinsIC (⛏). I obsess about the tectono-stratigraphic development of sedimentary basins. Why? Because I'm hopeless at everything else. View all posts by Christopher Aiden-Lee Jackson

What I say. And when.